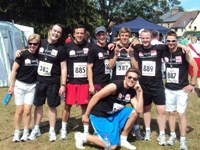 Well fun run? I don’t think the team would agree!

The temperature was in the late 20’s and most of the team had not done a great deal of exercise in over a year.

We had a late withdrawal in Jen due to an injury she picked up in training so she was substituted by new recruit James who actually went on to win the race between us at the company. The run had a huge turnout and we are all looking forward to the next race!